Travel through Mars during the Victorian-era and compete for mining resources. The fate of Earth’s population relies on what you can find and how successful you are!

Mission: Red Planet offers 2-6 players aged 14 years and over the chance to discover space and provide resources for Earth. Celerium is an ore that can produce ten times the power of a steam engine and has been found on Mars. So, find this and you may just become the most successful mining company.

This 2015 edition of Mission: Red Planet is similar to the original 2005 version, but with a few added features. The components for this game now allows for up to six players instead of the original five and also includes special two-player rules. There is a new variety of cards as well as Mars’ moon Phobos as a new zone astronauts can explore!

Gain the most points by mining resources and completing mission cards to win the game!

Listed below is an overview of how to play:

Find the components of the game listed below:

Be the first to review “Mission: Red Planet” Cancel reply 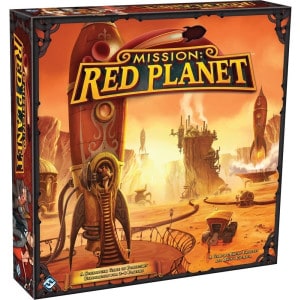 You're viewing: Mission: Red Planet £35.95
Add to basket
We use cookies on our website to give you the most relevant experience by remembering your preferences and repeat visits. By clicking “Accept”, you consent to the use of ALL the cookies.
Cookie settingsACCEPT
Manage consent