Bring Minecraft to life is this board game where players build structures, mine resources, explore the Overworld and more. Throughout the game you will come across the famous Endermen, Creepers and more mobs which players must defeat using their weapons!

Minecraft Builders & Biomes is a game where 2-4 players aged 10 years and over can experience a real Minecraft adventure. Enjoy continuous fun as the average game lasts around 30-60 minutes and can be played using different strategies each time!

Minecraft Builders & Biomes comes with easy to understand instructions so that gameplay can begin straight away. Points are earned during the three scoring rounds when mining of blocks is completed. Players can choose one of four biomes including the desert, forest, mountains or snowy tundra during the first round. The second and third round contains options of different materials and structures players can use on their boards. The game ends after the third scoring round and the player with the most experience points is the winner!

Below you will find a simplified version of how to play Minecraft Builders & Biomes:

Find the full list of game components for Minecraft Builders & Biomes below:

Be the first to review “Minecraft Builders & Biomes” Cancel reply 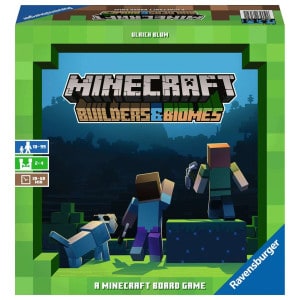 You're viewing: Minecraft Builders & Biomes £25.95
Add to basket
We use cookies on our website to give you the most relevant experience by remembering your preferences and repeat visits. By clicking “Accept”, you consent to the use of ALL the cookies.
Cookie settingsACCEPT
Manage consent