Armies of The Lord of the Rings Contents

Find the full list of contents included in this 244-page hardback below:

– Brief background of 16 army lists for the forces of Good as well as points values, special rules, characteristics, and Heroic Tiers. Including The Shire, The Fellowship, The Rangers, Númenor, Minas Tirith, Wildmen of Druaden, The Fiefdoms, The Dead of Dunharrow, Arnor, Rohan,  Rivendell, Lothlórien, The Misty Mountains, Fangorn, The Kingdom of Khazad-dûm, and Wanderers in the Wild.
– Background of 11 army lists for the forces of Evil also including characteristics, points values, special rules and Heroic Tiers. Including Barad-dûr, Angmar, Mordor, Moria, Isengard, The Easterlings, Variags of Khand, The Serpent Horde, Far Harad, Corsairs of Umbar, and Sharkey’s Rogues.
– 11 Narrative Play Scenarios all based on pivotal battles such as The Fall of Arnor, The Last Alliance, The Fall of Khazad-dûm,  Ambush at Amon Hen, Ambush at Ithilien, Last March of the Ents, The Deeping Wall is Breached, Paths of the Druadan, The Black Ships, The Battle of Bywater and The Battle of Pelennor Fields.
– Full Allies Matrix which shows factions that can work together.
– Army Bonuses.
– 269 profiles and rules for Heroes, Villains, Warrioirs and Monsters.

Be the first to review “Lord of the Rings Armies: Strategy Battle Game” Cancel reply 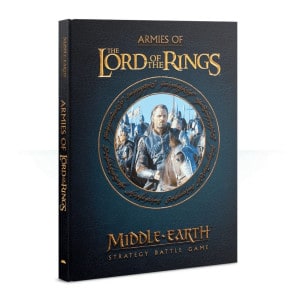 You're viewing: Lord of the Rings Armies: Strategy Battle Game £29.40
Add to basket
We use cookies on our website to give you the most relevant experience by remembering your preferences and repeat visits. By clicking “Accept”, you consent to the use of ALL the cookies.
Cookie settingsACCEPT
Manage consent