Operate your very own shop using a unique set of components in Merchants Cove! However, only the wealthiest merchant will be declared the winner.

Merchants Cove is a fun eurogame where every player takes on the role of different fantasy merchants, all with their own unique shop. The merchants will sell their goods to all the arriving adventurers at the market in the Five Realms. Each player will use their own specific components and mechanisms in order to produce goods, increase efficiency, and earn money!

Merchants Cove is recommended for 1-4 players aged 14 years or over.

Although the merchants work alone in their shops, they are also competing against fellow players to attract customers, influence their demands and even secure sponsorships. To help them out merchants are able employ local townsfolk to come work in their shops as staff. Another option for those who dare to cut corners, is gaining leverage from the corrupt lair of rogues, but it will come at a cost. After spending three days at the markets, the richest merchant will be declared the winner!

Be the first to review “Merchants Cove” Cancel reply 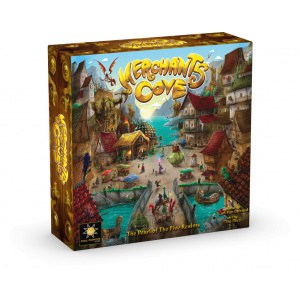 You're viewing: Merchants Cove £54.18
Add to basket
We use cookies on our website to give you the most relevant experience by remembering your preferences and repeat visits. By clicking “Accept”, you consent to the use of ALL the cookies.
Cookie settingsACCEPT
Manage consent