Lead your Blood Angel chapter with Mephiston: Lord of Death! Including a citadel round base, plasma pistol and sword Vitarus.

Mephiston: Lord of Death is well respected among the Blood Angels and carries the will and power to overcome what no other Blood Angel has. Mephiston battled against near-death to overcome ‘the black rage’, the curse that has threatened the Blood Angels and their successors for a thousand years. Crossing the Rubicon Primaris has demonstrated the embrace of the new battle-brothers and the chapter has become more powerful than ever before. Mephiston will go up against enemies armed with his force sword, fangs and plasma pistol.

Warhammer 40k Blood Angels are known for being one of the First Founding Legions of the original Space Marines and are greatly feared for being bloodthirsty during battles. This ancient chapter suffers the threat of extinction, and now they need to gather more numbers to replenish their losses. We highly recommend using the Citadel Colour System to bring these incredible Blood Angels miniatures to life. Decide between classic and contrast painting methods and browse through the amazing selection of vibrant paints which have all been designed specifically for Warhammer painting. Get creative and make your brand new miniature as unique as possible by paying close attention to detail. Once primes and ready, introduce them to all future battles of Warhammer 40k!

Be the first to review “Mephiston: Lord of Death (Blood Angels)” Cancel reply 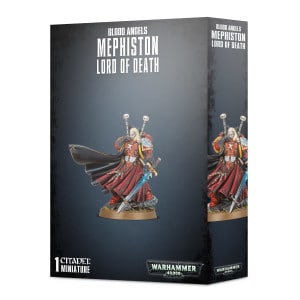 You're viewing: Mephiston: Lord of Death (Blood Angels) £19.95
Add to basket
We use cookies on our website to give you the most relevant experience by remembering your preferences and repeat visits. By clicking “Accept”, you consent to the use of ALL the cookies.
Cookie settingsACCEPT
Manage consent