Engage with the historical battles that took place during World War Two in Memoir ’44! If you are searching for a historical game surrounding combat then look no further!

Memoir ’44 is a game where 2-8 players aged 8 years and over will revisit the D-Day battles and control their own forces. Command the Axis or Allied army and fight through battles themed around well-known historical battles such as Pegasus Bridge, Operation Cobra and Omaha Beach.

Memoir ‘44 will encourage players to plan strategies in order to outwit their opponents and attempt to overcome the enemy force. Each unit is clearly signified by small plastic figures and units why vary from soldiers to tanks.

The game includes amazingly detailed miniatures and historically accurate tanks, infantry and artillery. Players can also use multiple board and add up to 8 players for large scale operations and take part in the challenges of a large scale battlefield.

Achieve victory by using strategic card play and timely dice rolling with a flexible battle plan. The average game of Memoir ’44 lasts between 30 to 60 minutes of entertainment and encourages match play. The first player to win the set number of victory medals will become the winner of the game!

With over 15 battle scenarios to choose from this game can be played over and over again. Each scenario mimics the troop placements, historical terrain and objectives of each army. Commanders will deploy troops using Command and Tactic cards and apply the skills of his units.

Find the full list of game components for Memoir ‘44 Below:

Be the first to review “Memoir ’44” Cancel reply 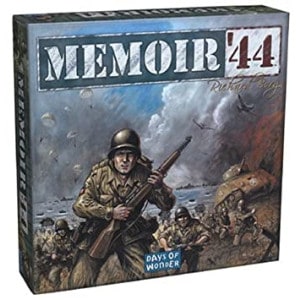 You're viewing: Memoir ’44 £48.95
Add to basket
We use cookies on our website to give you the most relevant experience by remembering your preferences and repeat visits. By clicking “Accept”, you consent to the use of ALL the cookies.
Cookie settingsACCEPT
Manage consent