This Master of Executions kit contains an intimidating HQ choice for the Chaos Space Marines army. Including Head Options, Weapons, Citadel Base and more!

The multipart plastic kit contains the necessary components to assemble one Master of Executions. The striking HQ choice for any Chaos Space Marines army has one sole purpose, to eliminate the enemy characters using his fearsome axe of dismemberment. The model clearly displays hallmarks of an executioner, including a trophy rack, bone decoration on his armour, and recently decapitated heads found in his right hand.

Throughout the gruesome battles of Warhammer 40k the Master of Executions has only one thing on his mind, the decapitations he is desperate to administer. He forms part of the traitor legions of the Chaos Space Marines, known for being an ancient enemy of the Imperium. These once loyal Space Marines were warped and mutated by the four daemonic Chaos Gods; Khorne, Tzeentch, Slaanesh and Nurgle. Created during the Horus Heresy, the Heretic Astartes were led by Horus the Warmaster and turned against the Emperor. This act of heresy that would soon lead to countless deaths as well as centuries of endless war.

We highly recommend using the Citadel Plastic Glue and Colour System to make your miniature unique. Unleash your creativity and browse through the incredible range of vibrant Citadel paints which have all been designed specifically for Warhammer painting. Once primed and ready, introduce this gruesome character to the endless battles of Warhammer 40k! 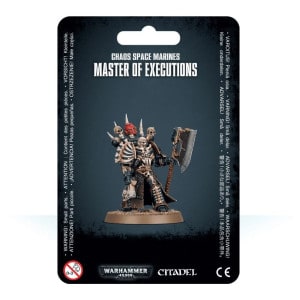 You're viewing: Master of Executions (Chaos Space Marines) £13.90
Add to basket
We use cookies on our website to give you the most relevant experience by remembering your preferences and repeat visits. By clicking “Accept”, you consent to the use of ALL the cookies.
Cookie settingsACCEPT
Manage consent