Take on the roles of Marvel villains such as Hela, Thanos, Taskmaster and more in this edition of Villainous. Players will go against mighty heroes such as Thor and Spiderman to achieve unique objectives and win the game!

Marvel Villainous is a strategy board game where 2-4 players aged 12 years or over will be given unique objectives that need completing. Players will take on roles of the evil Hela, Killmonger, Thanos, Ultron and Taskmaster as they go up against powerful heroes including Captain America and Iron Man.

The aim of the game is to take over and dominate the Marvel universe as it’s now the villains time to shine. Using cards and actions players will need to achieve their personal objectives to achieve global destruction and win the game.

Marvel Villainous includes easy-to-learn instructions so that gameplay can begin straight away. Enjoy the spectacular miniatures and highly detailed how to play video below and begin playing with your group of Marvel fans!

A brief overview on how to play Marvel Villainous will be provided below:

We have provided the full list of game components below:

How to Play Marvel Villainous 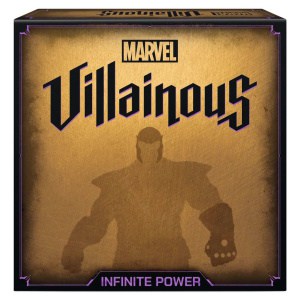 You're viewing: Marvel Villainous: Infinite Power £23.40
Add to basket
We use cookies on our website to give you the most relevant experience by remembering your preferences and repeat visits. By clicking “Accept”, you consent to the use of ALL the cookies.
Cookie settingsACCEPT
Manage consent