Jump into the Marvel Universe with Marvel Champions: The Card Game, a cooperative Living Card Game for one to four players!

Iron Man and Black Panther team up to stop Rhino from rampaging through the streets of New York. Captain Marvel and Spider-Man battle Ultron as he threatens global annihilation. Do you have what it takes to join the ranks of these legendary heroes and become a champion?

Marvel Champions: The Card Game invites players embody iconic heroes from the Marvel Universe as they battle to stop infamous villains from enacting their devious schemes. As a Living Card Game, Marvel Champions is supported with regular releases of new product, including new heroes and scenarios.

Every game of Marvel Champions invites you to play as an iconic Marvel hero, complete with their own 40-50 card deck. Just one Core Set allows four players to team up with their own heroes, and gives you a complete playset of cards right out of the box!

Once all players have selected their hero, they choose a scenario—taking on a nefarious Marvel villain and their matching scheme. Although each villain brings their own allies and tactics to the scenario, these scenarios can also be customized with additional modular encounters to increase the challenge of a fight or mix up the forces arrayed against you.

However you choose to play, Marvel Champions: The Card Game lets you feel the power of a Marvel hero. Can you balance power and responsibility, and save the world in the process? 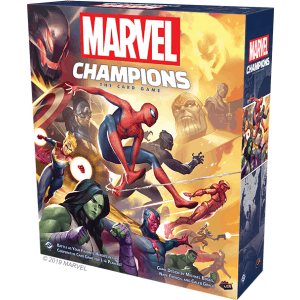 You're viewing: Marvel Champions: Core Set £40.00
Add to basket
We use cookies on our website to give you the most relevant experience by remembering your preferences and repeat visits. By clicking “Accept”, you consent to the use of ALL the cookies.
Cookie settingsACCEPT
Manage consent