The Black Templars Crusade Fleets are usually led by an experienced Marshal. This miniature will oversee the order of battle and also command their troops from the front lines!

Leading the Black Templars from the front lines, the Marshal provide both strength and skill of warriors under command. They are considered to be a strategic genius with centuries of experience, and their good deeds are usually rewarded with ancient artefacts found within the Chapter’s vaults.

The Black Templars have been on the longest Imperial Crusade ever known in order to prove their undying loyalty to the Emperor of Mankind. The crusade obsessed Space Marines number in the thousands, they are spread across a number of systems and act as independent units. While they are more independent than other chapters, they all answer to the  High Marshal of the Black Templars.

Where the Codex-compliant chapters will take to battle under the command of their Captains, the Black Templars will be lead by the fearsome Marshals. Their commanding presence helps to enhance the abilities of the Space Marines chapter which fight alongside them. Armed with a choice of the Power Sword, Power Axe, Plasma Pistol or Auto-Flamer, the Marshal makes an ideal HQ choice. Their is also the option to choose between two heads, both unhelmeted with one featuring a rebreather and the other featuring a circlet crown!

Be the first to review “Marshal (Black Templars)” Cancel reply 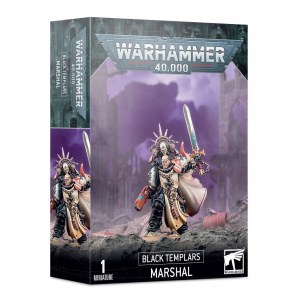 You're viewing: Marshal (Black Templars) £16.67
Add to basket
We use cookies on our website to give you the most relevant experience by remembering your preferences and repeat visits. By clicking “Accept”, you consent to the use of ALL the cookies.
Cookie settingsACCEPT
Manage consent