Mansions of Madness: Second Edition is a fully cooperative, app-driven board game of horror and mystery for one to five players that takes place in the same universe as Eldritch Horror and Elder Sign. Let the immersive app guide you through the veiled streets of Innsmouth and the haunted corridors of Arkham’s cursed mansions as you search for answers and respite.

Fight for your life in Mansions of Madness Second Edition, the app-assisted horror game inspired by the works of H.P. Lovecraft. From the makers of Eldritch Horror, this fully cooperative game takes you and up to four other players on a harrowing adventure through the dark and desolate halls and alleyways of Arkham. Much like the original Mansions of Madness game, the second edition offers a number of thrilling and confounding scenarios, each with a unique and unpredictable map, intricate puzzles, and bloodthirsty monsters.

The gameplay of Mansions of Madness Second Edition is modeled after that of the first edition, however the game’s companion app and minor changes to the game system make the experience distinctly different. In the asymmetrical first edition, one player had to take on the Keeper role, controlling the monsters and mythos. In this edition, the app takes over that function, spawning creatures, generating events, and even randomizing the game board to increase the mystery and anticipation of every round. Additionally, because there is no need for a Keeper, Mansions of Madness Second Edition can be played as a single-player game.

Eight brave investigators stand ready to confront four scenarios of fear and mystery, collecting weapons, tools, and information, solving complex puzzles, and fighting monsters, insanity, and death. Open the door and step inside these hair-raising Mansions of Madness: Second Edition. It will take more than just survival to conquer the evils terrorizing this town. 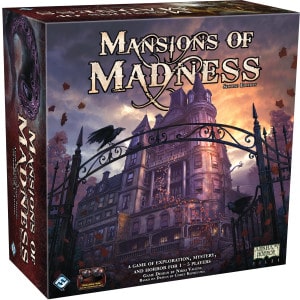 You're viewing: Mansions of Madness (2nd Edition) £70.50
Add to basket
We use cookies on our website to give you the most relevant experience by remembering your preferences and repeat visits. By clicking “Accept”, you consent to the use of ALL the cookies.
Cookie settingsACCEPT
Manage consent