Take on the role as Mayor of the city of Machi Koro in this 5th anniversary edition. However, it will be tough as the city faces big demands including jobs, theme parks, factories and more. Do you have what it takes?

Machi Koro enables 2-4 players aged 10 years or over to build and develop the city. This fast-paced game is dependent on dice rolls which can earn players new establishments or even landmarks. For example, if a player rolls a total that matches the value on their establishment they can earn coins. This money can then be used to build landmarks, adding wealth to the city.

The city of Machi Koro currently consist of only a bakery and a wheat field, so this will need lots of luck and money to achieve the demands. Due to this, the first player able to construct all four landmarks known as the Train Station, Shopping Mall, Amusement Park and Radio Tower will win the game!

Find an overview on how to play Machi Koro below:

The full list if components for Machi Koro will be found below:

How to Play Machi Koro 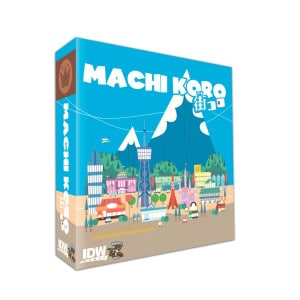 You're viewing: Machi Koro (5th Anniversary Edition) £23.50
Add to basket
We use cookies on our website to give you the most relevant experience by remembering your preferences and repeat visits. By clicking “Accept”, you consent to the use of ALL the cookies.
Cookie settingsACCEPT
Manage consent