The Ringwraiths were once Kings of Men and bearers of the magical rings. However, they are now the deadliest servants of Sauron, referred to as the Nine, and have been granted Fellbeasts to aid them through battle.

Winged Nazgûl, also referred to as Fell Beasts, are the second fastest flying creatures that were used by Nazgûl at the Ford of Bruinen. The Ringwraiths were once known as the Kings of Men and were bearers of the rings created by Sauron. Although the rings granted endless life they gradually enslaved the Kings and are known as the most deadly servants.

Fellbeasts are described as large winged creatures without any feathers and were bred specifically for the servants of Sauron. These creatures are extremely powerful and will either bite their prey or swoop down and crush them. They have also been known to snatch their victims and drop them from high into the air.

Using the Citadel glue and paint you can assemble and prime your spectacular miniature. Choose from a huge variety of paints which have all been made specifically for miniature painting and get creative. Once painted, these miniatures are completely unique and ready to participate in all future battles of The Lord of the Rings!

This set contains one plastic Winged Nazgûl and can be assembles as either a Witch-king mounted on armoured Fell Beast or Ringwraith mounted on a Fell Beast. There is also two Ringwraith weapon and head variants.

Find the full list of components for Winged Nazgûl below:

Be the first to review “Winged Nazgûl: LOTR” Cancel reply 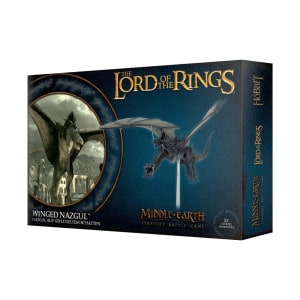 You're viewing: Winged Nazgûl: LOTR £29.81
Add to basket
We use cookies on our website to give you the most relevant experience by remembering your preferences and repeat visits. By clicking “Accept”, you consent to the use of ALL the cookies.
Cookie settingsACCEPT
Manage consent