The armies of Harad have employed massive war-beasts known as Mumaks to trample their enemies. Once a Mumak gets going, they are unstoppable and will toss aside enemy as if they were broken dolls.

War Mumak of Harad employ Mûmakil, massive war-beasts which were trained to trample their enemies using their colossal hooves. Also referred to as Oliphaunts, they are animals similar to elephants and are used as a form of travel and to charge through battle, tossing all enemies aside.  A Mûmak is capable of breaking through an enemy line, all while Haradrim warriors rain deadly arrows on its mighty back.

Harad is the immense region surrounding the south of both Gondor and Mordor in the Middle-earth. Here resides the warriors wearing both scarlet and gold and often armed with weapons. Many will train and ride the beasts into battle as a means of both defence and transport. It is almost impossible to kill a Mûmak, as the only way to do so is by shooting it’s eye which requires the capability to stand in front of it without being trampled on.

Use the Citadel Colour System to bring your beast and warriors to life through a wide range of vibrant colours. Make your grand entrance to battle with the incredible and unique War Mumak of Harad miniatures by priming them ready for battle!

This boxed set also includes weapons for the Warriors of Harad, six of them with bows and six with spears.

Be the first to review “War Mumak Of Harad: LOTR” Cancel reply 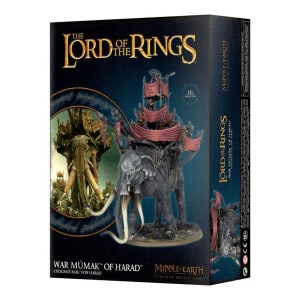 You're viewing: War Mumak Of Harad: LOTR £51.68
Add to basket
We use cookies on our website to give you the most relevant experience by remembering your preferences and repeat visits. By clicking “Accept”, you consent to the use of ALL the cookies.
Cookie settingsACCEPT
Manage consent