The Three Hunters decided to purse the Uruk-hai after they abducted both Merry and Poppin. They tracked them down to Rohan and fought alongside King Théoden before searching for their allies.  These Hunters make a great addition to any army of good and will go up against enemies who multiply them in numbers!

The Three Hunters kit builds three miniatures including Aragorn, Gimli and Legolas as they appear at the docks of Harlond during The Lord of the Rings: The Return of the King. Their ability to provide hard-hitting power up close and at range proves they make a great addition to any army of good. Legolas’ accuracy with his bow, Aragorn’s sword Andúril and Gimli’s wide range or attacks will provide great support to the army and they are able to take on many times times their number.

This set also includes a plastic priority marker. The marker features the Three Hunters as well as their weapons and the Eye of Sauron on the other side. This will be used to mark who has priority during each turn of the game.

Each miniature is highly detailed, the Three Hunters all wear elven cloaks with Aragorn wearing it over his Ranger garb, Legolas over his forest-hued clothing and Gimli in addition to his armour. Gimli is armed with a two-headed axed on his back alongside a brace of throwing axes.

Find the full list of components for The Three Hunters below:

Be the first to review “The Three Hunters: LOTR” Cancel reply 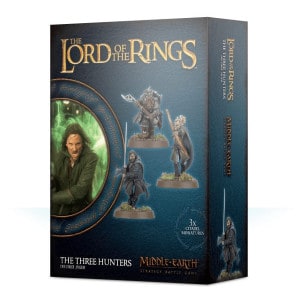 You're viewing: The Three Hunters: LOTR £19.88
Add to basket
We use cookies on our website to give you the most relevant experience by remembering your preferences and repeat visits. By clicking “Accept”, you consent to the use of ALL the cookies.
Cookie settingsACCEPT
Manage consent