The mighty creature of age and power has been awoken and is determined to bring destruction. The Balrog is amongst the most evil and largest models making it the perfect centre piece for your evil Lord of the Rings army.

The Balrog is a powerful monster of great age and power. The tall beings shroud themselves in both fire and darkness, armed with fiery whips and occasionally swords. After being awoken by Dwarven miners, Balrog brought great destruction to their kingdoms, overpowering Durin and his warriors during battles. This beast is amongst one of the largest models, making the perfect centre piece for the evil army.

Also known as Valaraukar, they were once Maiar that have now been seduced and corrupted by Melkor. They are truly powerful creatures that have managed to drive away Ungoliant and even contend with Gandalf. They appear huge but man-like will appear as dark shadows or spirits of fire and favour the whip of flame as a weapon during battle. There is very few of these incredible creatures throughout The Lord of the Rings, with an estimated seven in total.

Bring the incredibly large beast to life using the Citadel Colour System. Get creative with fire, darkness and shadows by using different painting techniques and choosing from a large range of colours designed specifically for Warhammer miniatures. Once primed they will be ready for any future battles of The Lord of the Rings!

Find the full list of components for The Balrog below:

Be the first to review “The Balrog: LOTR” Cancel reply 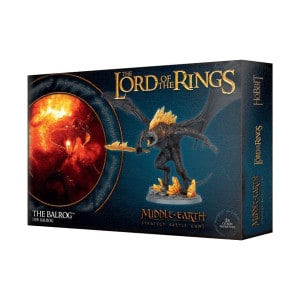 You're viewing: The Balrog: LOTR £29.81
Add to basket
We use cookies on our website to give you the most relevant experience by remembering your preferences and repeat visits. By clicking “Accept”, you consent to the use of ALL the cookies.
Cookie settingsACCEPT
Manage consent