King of the Dead and Heralds: LOTR

King of the Dead and Heralds includes three heroes ready to leave your Army of the Dead. They will kill the enemy monsters with ease and finally fulfill the oath in order to find the peace he so desperately craves.

The breaking of the oath that the King of the Dead pledged to Isildur resulted in the army being cursed. However, the Kings spirit will linger on until he has honoured his word, and so upon the arrival of Aragorn he agrees to go up against the armies of Mordor. Once his oath has finally be fulfilled, the dead will finally find the peace they crave.

King of the Dead and Heralds Components

Be the first to review “King of the Dead and Heralds: LOTR” Cancel reply 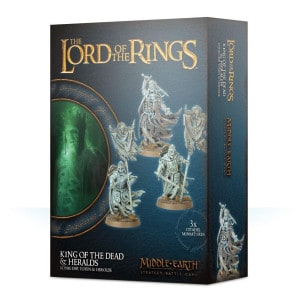 You're viewing: King of the Dead and Heralds: LOTR £19.88
Add to basket
We use cookies on our website to give you the most relevant experience by remembering your preferences and repeat visits. By clicking “Accept”, you consent to the use of ALL the cookies.
Cookie settingsACCEPT
Manage consent