Éowyn and Merry have decided to travel alongside Théoden’s  army to the Battle of Pelennor Fields in secret. To do this, the shield maiden of Rohan disguised herself as Rider and renamed herself Dernhelm. Control them both as they travel to battle both on foot or on horseback!

Éowyn and Merry are travelling alongside Théoden’s army in secret to fight at the Battle of Pelennor Fields. Éowyn is a shield maiden of Rohan unwilling to be left behind while others make their way to war. Therefore, the niece to King Théoden decided to disguise herself as a Rider and gave herself and called herself Dernhelm.

Meriadoc Brandybuck is a Hobbit and close friends of Frodo. He became a member of the Fellowship of the Ring and is considered to be the most intelligent of the hobbits. For example, he is known to have protected his friends and is always well prepared, even before the Quest of the Ring began.

This kit contains the components to assemble Éowyn and Merry on foot and on horseback. There is the option to remove Merry when mounted and just leave Éowyn. Merry is armed with a sword and shield and is clothes in uniform of a Squire of Rohan. Éowyn has the option to be assembled with either a head featuring her golden hair or in her guise as Dernhelm. We recommend using both Citadel glue and paints to bring these incredible miniatures to life and ready for battle!

Be the first to review “Éowyn and Merry: LOTR” Cancel reply 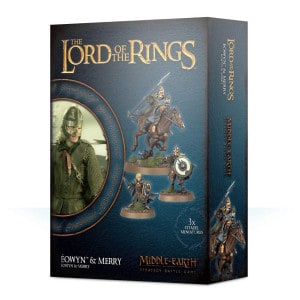 You're viewing: Éowyn and Merry: LOTR £19.95
Add to basket
We use cookies on our website to give you the most relevant experience by remembering your preferences and repeat visits. By clicking “Accept”, you consent to the use of ALL the cookies.
Cookie settingsACCEPT
Manage consent