Become powerful lords desperate to gain control and influence over the great city of Waterdeep. Players must get their hands on resources, either through trickery or force!

Lords of Waterdeep is a fantasy board game where 2-5 players aged 12 years or over will hire adventurers and deploy agents to expand their influence over the Waterdeep city.

Players must fight for control of the city by will placing their meeples onto the correct spots on the board. If successful, players will gain actions and resources to use against their fellow players.

To make the game even better players will have the chance to purchase buildings. These will act as extra spots on the playing board which is constantly changing and may require extra planning and adjusting. To top it all off, if other players are to use your buildings you will receive a reward!

Throughout the game players will expand their city by purchasing buildings and either hindering or helping other lords.

Find the full list of game components for Lord of Waterdeep below: 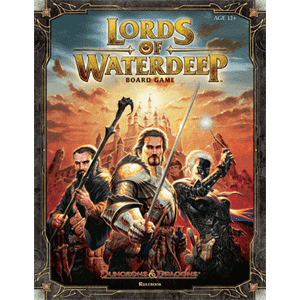 You're viewing: Lords of Waterdeep – Dungeons & Dragons £35.20
Add to basket
We use cookies on our website to give you the most relevant experience by remembering your preferences and repeat visits. By clicking “Accept”, you consent to the use of ALL the cookies.
Cookie settingsACCEPT
Manage consent