Introduce the ancient and most powerful master of the Seraphon, Lord Kroak. Battle your enemies with nothing more than the flick of a finger and become a unconquerable force on the battlefield.

Lord Kroak is the most powerful of the Slaan masters of Seraphon. An incredible trait of his is being able to cast out spells with just the flick of a finger and create an energy barrier that surrounds him for protection. In the chance that the enemy does manage to fire at the Slann master, his spirit within will hold together in face of all but the most serious injuries. You can assemble the spectacular miniature with either the death mask or ceremonial headdress!

Seraphon are reptilian creatures, also referred to as Lizardmen, who battle for the Grand Alliance of Order. The army includes mighty warriors and powerful magicians who claim their energy from the sacred stars. The restoration of the temple-ships by Dracothian resulted in the birth of the Seraphon as Lizardmen used them to flee the End Times.

Bring the incredible Lord Kroak to life by assemble and painting using the Citadel Colour System. Once you have chosen your painting methods you can unleash your creativity and discover a huge range of vibrant colours to prime your miniature ready. Simply follow the steps provided and your unique miniature will be ready for battles of Warhammer Age of Sigmar!

This kit contains the components to assemble Lord Kroak with an option of two head variants.

Assemble your miniature with the following components:

Be the first to review “Lord Kroak (Seraphon)” Cancel reply 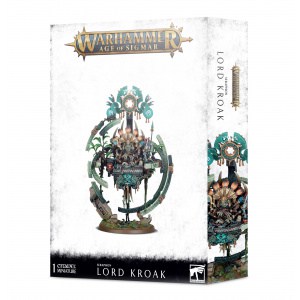 You're viewing: Lord Kroak (Seraphon) £58.76
Add to basket
We use cookies on our website to give you the most relevant experience by remembering your preferences and repeat visits. By clicking “Accept”, you consent to the use of ALL the cookies.
Cookie settingsACCEPT
Manage consent