Bring new and intriguing challenges with the first expansion pack for Letters from Whitechapel. Play now to find out more about Jack the Ripper and the events that occurred!

Letters from Whitechapel is a game centered around the murders of Jack the Ripper. The Dear Boss expansion furthers the investigation as 2-6 players aged 14 and over play the role of Jack and investigators.

Letters from Whitechapel: Dear Boss Expansion includes three new card decks to help aid either the Police or Jack. Alongside this you will also get 12 new miniatures to replace the pawns from the base game. Gain a better insight into the lives of those played out the tragedy of 1888 and the letters signed by Jack the Ripper.

Investigators will need to track down the killer before time runs out and he disappears!

Below we have provided rules on how to set up the Dear Boss expansion pack:

All expansion pack components are listed below:

Be the first to review “Letters from Whitechapel: Dear Boss Expansion” Cancel reply 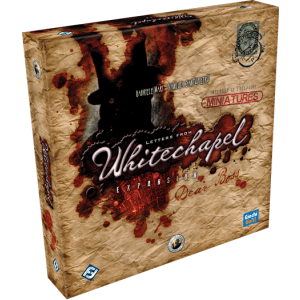 You're viewing: Letters from Whitechapel: Dear Boss Expansion £15.00
Add to basket
We use cookies on our website to give you the most relevant experience by remembering your preferences and repeat visits. By clicking “Accept”, you consent to the use of ALL the cookies.
Cookie settingsACCEPT
Manage consent