Bring one of the deadliest warriors known as Lelith Hesperax to your battles of Warhammer 40k! The leader of the army is a melee expert and skilled duellist, essential to the Drukhari forces.

Lelith Hesperax is a leader of the Drukhari forces and is well known for her fighting abilities. The miniature lacks armour and much prefers close combat, for example she is known to have fought against 10 opponents at the same time without a scratch. She is one of the most deadly of her kind and is known for having razor sharp blades within her long hair. Using her weapons, she is capable of killing multiple warriors within seconds but her main goal is to capture the Chaos Lord of the Emperors children. Lelith is a natural born killer and makes a perfect contribution to the Drukhari forces.

Drukhari, also known as the Dark Eldar, are a highly advanced alien race consisting of mainly pirates and slavers. They take great pleasure in inflicting as much pain to their enemies as possible by stalking their targets and striking without warning. The Drukhari are well known for their high speed attacks and are capable of travelling faster than light using their ability to warp jump. The army do not live on a settled world, instead the population is mainly found within the Dark City of Commorragh. They make up for their lack of numbers with their advantages of speed and technology, making them an essential addition to all battles of Warhammer 40k.

Bring the incredible Lelith Hesperax miniature to life with the Citadel Colour System. Decide between painting methods and brushes to bring out every stunning detail of your new miniature. Be creative and choose from a huge range of vibrant colours designed specifically for Warhammer painting and begin your 40k battles!

Be the first to review “Lelith Hesperax (Drukhari)” Cancel reply 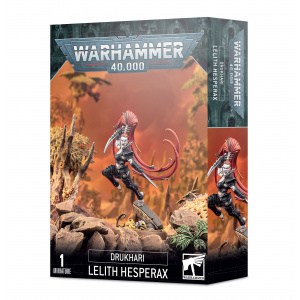 You're viewing: Lelith Hesperax (Drukhari) £21.42
Add to basket
We use cookies on our website to give you the most relevant experience by remembering your preferences and repeat visits. By clicking “Accept”, you consent to the use of ALL the cookies.
Cookie settingsACCEPT
Manage consent