Legacy Of Caliban: The Omnibus (Paperback)

The Dark Angels’ eternal hunt for the Fallen embroils them in a dangerous conspiracy to change the past and destroy the future, bringing the entire Imperium under the dominion of Chaos.

READ IT BECAUSE
It’s the entire epic saga. From the first battles against the orks on Piscina to the final apocayptic confrontation amidst the shattered ruins of Caliban itself (yes, really!), you’ll discover all manner of secrets about the sons of the Lion…

THE STORY
Mystery lies at the heart of the sons of the Lion. Striking across the galaxy from their space-going fortress-monastery, the Rock, they defend mankind while constantly hunting their ancient enemies, the Dark Angels who turned to the Chaos Gods in the Horus Heresy. Where one of these Fallen is found, the Chapter descends, and no one is safe until the traitors are brought to justice. This series tells the tale of a hunt for the Fallen that embroils the Chapter in a plot to change the past and future and bring about the dominion of Chaos over the Imperium.

This omnibus contains the novels Ravenwing, Master of Sanctity and The Unforgiven, plus the anthology Lords of Caliban, which consists of the short stories Honour of the Third, A Hunt in the Dark, Battle-Brothers, Accept No Failure, Holder of the Keys and All Must End.

Be the first to review “Legacy Of Caliban: The Omnibus (Paperback)” Cancel reply 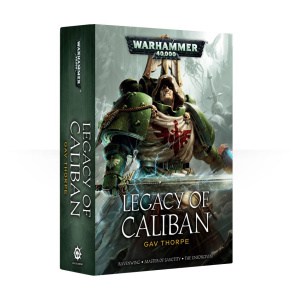 You're viewing: Legacy Of Caliban: The Omnibus (Paperback) £12.15
Add to basket
We use cookies on our website to give you the most relevant experience by remembering your preferences and repeat visits. By clicking “Accept”, you consent to the use of ALL the cookies.
Cookie settingsACCEPT
Manage consent