Leading her fellow vampires is Lauka Vai, Mother of Nightmares, once a vampire-knight who refused to prey on those who were weak. Now returning in a monstrous form, the hunger grows stronger than ever before. This kit will also builds a Vengorian Lord, commanders of great violence.

Lauka Vai, Mother of Nightmares has joined the opposing side after falling into primordial ooze after a run in with a Tzeentchian Sorcerer. The once courageous vampire-knight now suffers a strong thirst for blood and fits of rage. Already having slain her fellow knights, the Mother of Nightmares can turn on anyone at any point.

Warhammer Age of Sigmar is a miniature wargame consisting of four alliances that battle against each other. Lauka Vai forms part of the Grand Alliance of Death, where her only purpose is to kill all those who are living and impose the order of the dead. As a mixture of vampire, drake and bat-fiend, she stands tall while striking down on unfortunate souls.

Soulblight Gravelords form part of the Grand Alliance of Death with everlasting strength and cravings for blood. The eternally hungry monstrosities will carve their way through the Mortal Realms and command legions as requested by their leader, Nagash. Using dark powers they are capable of raising the dead and directing them to commit great acts of violence.

Miniatures can be painted using the Citadel Colour System that offers both classic and contrast methods so that you can bring your miniatures to life. Unleash your creativity with these water-based paints designed specifically for Warhammer miniatures. Including a vibrant and metallic range of colours so that you can achieve amazing results!

Assemble, Paint and Battle using the components below, which can also be assembled as a Vengorian Lord: 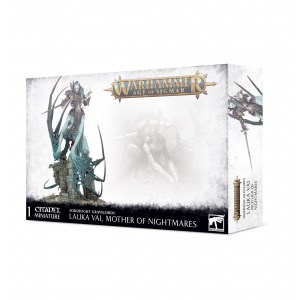 You're viewing: Lauka Vai Mother Of Nightmares £31.36
Add to basket
We use cookies on our website to give you the most relevant experience by remembering your preferences and repeat visits. By clicking “Accept”, you consent to the use of ALL the cookies.
Cookie settingsACCEPT
Manage consent