A dimensional gate has just opened, and monsters are surging over our world. You have been called to kill them and steal the artifacts from the monster bosses in Last Heroes the Board Game!

In Last Heroes use your weapons cleverly and help your fellow hunters by providing them ammunition, but in the end, only one hero will build up their name and get glory.

During your turn in Last Heroes, you choose one of the weapon cards from your hand and play it in:

Then you can attack one monster provided that you have the required weapons. When you kill a boss (in the third row), the player who has made a dent in the second row gets an artefact. If you directly kill a boss (without making a dent first), you need more weapons but you score the artefact for yourself. The game may end in two ways:

Last Heroes is both collaborative and competitive. You need the other players’ ammunition to load your weapons, and in return you help them by making a dent in the monsters’ rows. The winner is the player who has killed the most valuable monsters and provided the most ammunitions to their fellow hunters.

Be the first to review “Last Heroes” Cancel reply 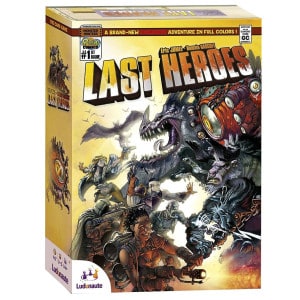 You're viewing: Last Heroes £4.95
Add to basket
We use cookies on our website to give you the most relevant experience by remembering your preferences and repeat visits. By clicking “Accept”, you consent to the use of ALL the cookies.
Cookie settingsACCEPT
Manage consent