When Lieutenant Kage of the 13th Penal Legion seemingly returns to life, he becomes a symbol for the Emperor’s servants… but his old commander Colonel Schaeffer has plans for Kage.

READ IT BECAUSE
After several years, it’s the triumphant return of fan-favourite characters Schaeffer and Kage, who are thrown into another mission where chances of survival are slim and only the strongest can hope to prevail.

THE STORY
Lieutenant Kage of the 13th Penal Legion is dead, his charred remains lost to the depths of a fiery chasm. But as his battalion – the Last Chancers – mourns, a new hero rises from the ashes. The Burned Man. Kage’s miraculous survival attracts a cult of desperate followers, who believe him sent to the ork-infested world of Armageddon by the God-Emperor Himself. However, the rampaging greenskins are not the only threat to his new life. The ruthless Colonel Schaeffer, his former commander, has seen through his ploy and will stop at nothing to bring his errant charge to justice… Yet unbeknownst to both men, darker powers yearn to see Armageddon bathed and bound in blood. Kage and Schaeffer must put the ghosts of their past aside and unite, or see the Emperor’s Light extinguished upon this tortured world forevermore. 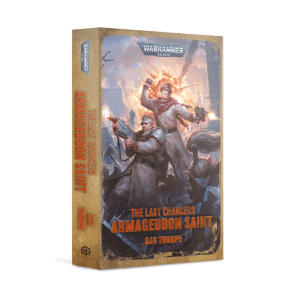 You're viewing: Last Chancers: Armageddon Saint (Paperback) £7.28
Add to basket
We use cookies on our website to give you the most relevant experience by remembering your preferences and repeat visits. By clicking “Accept”, you consent to the use of ALL the cookies.
Cookie settingsACCEPT
Manage consent