Kritza The Rat Prince joins the monstrous Soulblight Vampires after receiving the Blood Kiss. This transformation left him with special abilities including turning into a spawn of rats and escaping death!

Kritza The Rat Prince forms part of the Soulblight Vampires and is well dressed for the occasion. Death is of no worry to Kritza, his ability to vanish into a swarm of rats means he can easily get away and reappear when the would-be killer least expects it.

However, his attempts to undermine Radukar led him to an ill fate. Only by playing dead among many lifeless bodies did he manage to escape and feast upon rats nearby. Now granted the Blood Kiss, he is able to evolve into a member of the blood thirsty Soulblight.

Soulblight Gravelords are eternally hungry monsters that fight for the Grand Alliance of Death and leader Nagash.  They have one purpose only, to carve a path through the Mortal Realms and kill all who live. The army mainly consists of Vampires, Zombies and Skeletons with some being risen from their death to fight under the commands of Nagash despite their original beliefs.

Kritza is the perfect killer that can easily mess up his opponents battle plans and take victory. The Blood Kiss means that there is now a dark beast within that will fully take over the person who once existed and replace them with a darker self who craves nothing but blood.

Using the Citadel Colour System you can bring your new miniature to life and prime them ready for battle. Get creative and choose from a variety of vibrant water-based colours and painting methods designed specifically for Warhammer. Once painted,  Kritza The Rat Prince is ready for future battles of Warhammer Age of Sigmar! 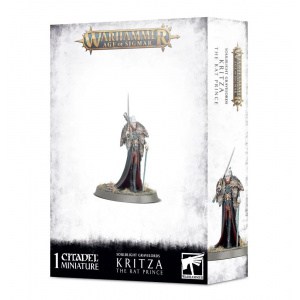 You're viewing: Kritza The Rat Prince (Soulblight Gravelords) £16.76
Add to basket
We use cookies on our website to give you the most relevant experience by remembering your preferences and repeat visits. By clicking “Accept”, you consent to the use of ALL the cookies.
Cookie settingsACCEPT
Manage consent