This multipart plastic kit contains the components to build a corrupted battle colossus of Chaos. Including the laser destructor, transfer sheet and option to be assembled as a Knight Rampager.

Assemble the Knight Desecrator with this multi-part plastic kit. The Knight possess mid- to close-range armaments which lend themselves towards duelling the enemy war engines, monstrous beasts and even tearing down the enemies constructions. Armed with the laser destructor, he can give a considerable punch at range.

The Knight Desecrator is a great kit, the miniature towers over a majority of the other models on the tabletop and comes with a choice of vicious faceplates, chains, pipes, spikes and horns so that you can make your Knight as unique and malicious as you wish. There is also a choice of either the reaper chainsword or thunderstrike gauntlet to help you crush any foe that manages to survive the impact of the laser destructor.

Bring horror to your enemies as the ground shakes with every step the Knight takes, a warning of the doom that awaits. No living thing will be spared and no victim is considered too mighty to escape their horrendous fate. However, for this murderous butcher defeating the foe is simply not enough. He must defeat every single opposing war engine by blasting and crushing all their mechanical targets until nothing but just scrap remains. 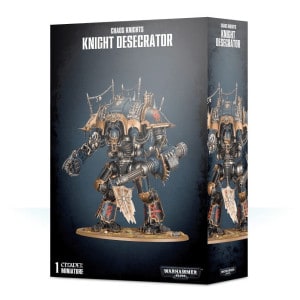 You're viewing: Knight Desecrator (Chaos Space Marines) £71.46
Add to basket
We use cookies on our website to give you the most relevant experience by remembering your preferences and repeat visits. By clicking “Accept”, you consent to the use of ALL the cookies.
Cookie settingsACCEPT
Manage consent