Looking for a competitive two player game? Klask has now arrived from the pubs of Denmark to fulfil your wishes!

The Klask Game requires two highly competitive players to battle it out in this Air Hockey spin-off.  The rules are extremely simple, first to 6 points wins.

There is three ways you can score points in this magnetic game. The first way to score a point is by simply scoring a goal. However, the other two ways of scoring points comes with a twist. If two of the small white cylinder magnets (called biscuits) attach to your playing piece, your opponent will win a point. If you lose control of your playing piece and somehow manage to end up in your own goal, you will win your opponent another point. There is no need to worry about complex rules as Klask is a game of speed and precision, though good control of the magnet would be beneficial. Be fast, but not too fast that you lose control!

Klask will only take you a few seconds to learn, though you may find yourself hooked to this game for hours! Suitable for all players aged 8 or above and will last around 20-30 minutes a game.

Klask can be played on a table or floor and contains:

Be the first to review “Klask (2 Players)” Cancel reply 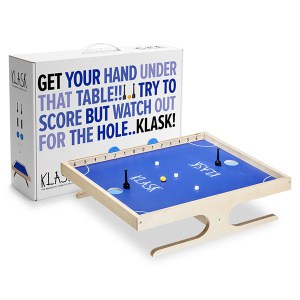 You're viewing: Klask (2 Players) £39.75
Add to basket
We use cookies on our website to give you the most relevant experience by remembering your preferences and repeat visits. By clicking “Accept”, you consent to the use of ALL the cookies.
Cookie settingsACCEPT
Manage consent