This kit contains all the components required to assemble a heavy support choice for the Ork armies. The weapon and transport platform can alternatively be built as the Hunta Rig!

This multipart plastic kit contains all the components to build one Kill Rig. Out of all the Orks’ mechanical creations, it is no secret that the Kill Rig is possibly the most daring. The giant metal sleigh that features gun tower into battle is dragged by a cantankerous tramplasquig while the Wurrboy blasts the enemies with psychic energy bolts. Warhammer 40k Orks, also known as greenskins, consist of a brutal and animalistic species which spreads like the plague across the Galaxy. The dangerous xeno race are both violent and cruel, what they may lack in intelligence is soon made up for in brute strength and unpredictability.

Very few sounds are as terrifying as the horrible hollering, clattering and stomping of the arrival of a Kill Rig. Pulled by a tramplasquig and outfitted with all manner of weapons the Wurrboy is able to survey the battlefield and fire out his powerful bolts of psychic energy. The Kill Rig also carries an entire crew which includes a driver, gunners, and Butcha Boyz. This makes an ideal transport for the units of Beast Snagga Boyz as well as a mobile command post for a Wurrboy.

This kit can also be assembled as a Hunta Rig with a separate Wurrboy.

Be the first to review “Kill Rig (Orks)” Cancel reply 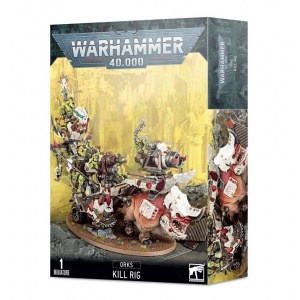 You're viewing: Kill Rig (Orks) £62.33
Add to basket
We use cookies on our website to give you the most relevant experience by remembering your preferences and repeat visits. By clicking “Accept”, you consent to the use of ALL the cookies.
Cookie settingsACCEPT
Manage consent