Charging onto the astrogranite to make their Blood Bowl debut are the brand new Khorne Team! Focused on the blood first and bowl second, these Skull-Tribe Slaughterers come with a unique set of skills, abilities, and stats, making them a handful for any opponent.

The Khornate Blood Bowl teams will often find themselves at a disadvantage, mainly due to their inability to score touchdowns ahead of their opponents. Despite this, the Skull-tribe Slaughterers are determined to buck this trend and believe that if they rank higher in leagues, the better calibre of skull they will claim for Khorne.

Want a team that is able to mutilate your opponent with ease as well as scoring a good touchdown? This Khorne team have just enough brain to ensure this will happen. The Marauder Linemen are hardy enough to withstand punishment and are smart enough to remember they need to pass the ball once during a match. Those who are made to endure the brutal training of Khornate teams will then become Bloodseekers. Extremely violent and bloodthirsty, they are great at putting the opposition out of commission and offloading any Blood Bowl balls to the team’s Beastmen who are intent on scoring touchdowns.

The rules required for using Khorne teams in games of Blood Bowl will be found in Spike! Journal 13. 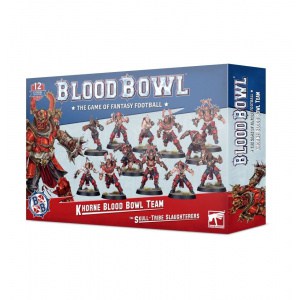 You're viewing: Khorne Team (Blood Bowl) £20.75
Add to basket
We use cookies on our website to give you the most relevant experience by remembering your preferences and repeat visits. By clicking “Accept”, you consent to the use of ALL the cookies.
Cookie settingsACCEPT
Manage consent