Driven into battle by the strong need to kill, Khorne Berzerkers will slaughter all in their path and leave nothing other than corpses in their wake. These murderous lunatics no longer have a trace of fear or compassion, instead they implants that will heighten their aggression to psychotic levels!

This Khorne Berzerkers kit contains the components requires to assemble 12 miniatures armed with a bolt pistol and mixture of chainweapons. Model these Berzerkers either standing or running and decide between 12 helmeted heads of different designs or a bare head which represents the Berzerker Champion. Throughout this kit you will also find plasma pistols, bolt pistols, sheathed swords, skulls on chains, grenades and ammo packs.

These traitor legions of the Chaos Space Marines are the enemy of the Imperium and were warped and mutated the four daemonic Chaos Gods known as Khorne, Tzeentch, Slaanesh and Nurgle. The Heretic Astartes were created during the Horus Heresy, when nine legions of Space Marines, led by Horus the Warmaster, turned against the Emperor of mankind, an act of heresy that would cause countless deaths and centuries of endless war.

We highly recommend using the Citadel Colour System to paint your new minaitures. Get creative and discover the wide range of vibrant Citadel paints which have all been created specifically for Warhammer painting. Once primed and ready, enter the endless battles of Warhammer 40k!

Find the full list of components for Khorne Berzerkers below: 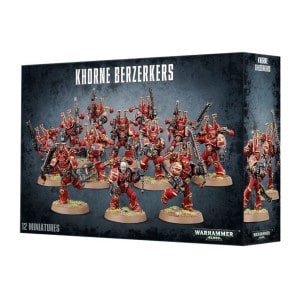 You're viewing: Khorne Berzerkers (Chaos Space Marines) £25.32
Add to basket
We use cookies on our website to give you the most relevant experience by remembering your preferences and repeat visits. By clicking “Accept”, you consent to the use of ALL the cookies.
Cookie settingsACCEPT
Manage consent