This kit contains the components required to assemble Kharn The Betrayer. Including the Multi-Part Plastic Components, Citadel Base, Plasma Pistol and more!

This kit contains all the necessary components to assemble Kharn The Betrayer. The leader of his own warband has lived a life full of both murder and betrayal yet will always be found in the middle of battle. Armed with a plasma pistol, he is able to fight his enemies while the chainaxe rips apart those who survive. Kharn is well known for being on eof the greatest Champions of Khorne, only second to the Daemon Prince Angron in power.

The Warhammer 40k traitor legions of the Chaos Space Marines are known as the ancient enemy of the Imperium, who were warped and mutated by vile energies and the four daemonic Chaos Gods; Khorne, Tzeentch, Slaanesh and Nurgle. The Heretic Astartes were created during an a big historical event known as the Horus Heresy, when nine legions of Space Marines turned against the Emperor of mankind.  This act of heresy would then lead to countless deaths and many centuries of endless war.

We highly recommend using the Citadel Plastic Glue and Paint to bring the Betrayer to life. Unleash your creativity and discover the incredible range of vibrant Citadel paints, which have all been designed specifically for Warhammer painting and to make even the slightest of details stand out. Once primed and ready, introduce your new unique miniature to the endless battles of Warhammer 40k! 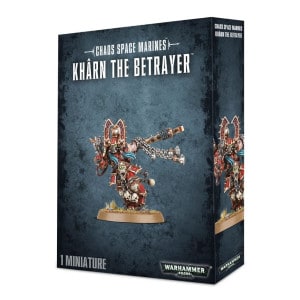 You're viewing: Kharn The Betrayer (Chaos Space Marines) £17.87
Add to basket
We use cookies on our website to give you the most relevant experience by remembering your preferences and repeat visits. By clicking “Accept”, you consent to the use of ALL the cookies.
Cookie settingsACCEPT
Manage consent