Kal Jericho and Scabs are based on the Black Library characters and will add long-ranged firepower and close-ranged fury. The incredible pair can be hired by all Necromunda gangs for extra support during battle!

Heroic Kal Jericho and sidekick Scabs are a pair that can be hired by Necromunda gangs. At close range Kal is deadly and will use his two hotshot laspistols to fight the enemy. If they somehow manage to survive, Kal also has his dueling sabre in his favour making him a great choice for up-close battles with opposing gangs. Scabs will also be at the ready to defend Kal with his stub gun and plasma gun. There is no Bounty Hunters as successful as Kal, along with Scabs he is an expert at placing himself in the way of danger and fighting his way out.

The planet of Warhammer 40k Necromunda is a hive world that features both factories and mines created during the Dark Age of Technology. The gangs will battle in the oldest undercities and fight until death without the chance witness daylight. This tabletop war game is played in a setting that resembles the hive city through a 3D tabletop layout which includes both multiple story buildings and bridges.

The rules for both Kal Jericho and Scabs will be found in Necromunda: The Book of Peril. 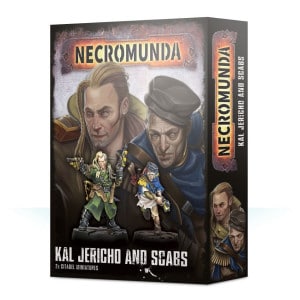 You're viewing: Kal Jericho and Scabs (Necromunda) £15.88
Add to basket
We use cookies on our website to give you the most relevant experience by remembering your preferences and repeat visits. By clicking “Accept”, you consent to the use of ALL the cookies.
Cookie settingsACCEPT
Manage consent