Watch the iconic movie come to life as players team up in the desperate struggle to escape the island before falling prey to the dinosaurs. In Jurassic Park: Danger! Players will take on roles of the dinosaurs eager to attack and humans fighting to escape in this suspenseful adventure game!

Jurassic Park Danger is an adventure game where 2-5 players aged 10 years or over will take on roles of both the characters and dinosaurs as featured in the film. One player will be in control of the dangerous Velociraptor, T-Rex and Dilophosaurus as they prowl through the jungle ready to attack. The rest of the players will be in control of the human team, who must get the park back online and escape to the helicopter before they are caught!

Find a simplified version of how to play Jurassic Park Danger below:

Find the full list of game components for Jurassic Park Danger below: 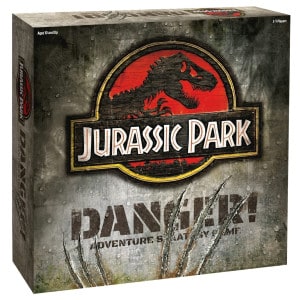 You're viewing: Jurassic Park: Danger! Adventure Strategy Game £27.30
Add to basket
We use cookies on our website to give you the most relevant experience by remembering your preferences and repeat visits. By clicking “Accept”, you consent to the use of ALL the cookies.
Cookie settingsACCEPT
Manage consent