Bring the popular Jaws movie to life in this suspenseful strategy board game! Players will take on roles of crew members and the Great White Shark as they compete for success.

Jaws Board Game is an adventure game where 2-4 players aged 12 years and over will re-enact the Steven Spielberg movie. Jaws is split into two different acts that mirror the two halves of the movie. Act one focuses on the shark making its first attempts to get near tourists while the crew members try to spot it and save swimmers. The second act refers to the Orca ship known as Quint’s vessel. Crew members have to use good action and strategy cards to battle the shark and save the boat.

This suspense game is perfect for all the family to join in on. If the shark is killed, the crew achieve victory. However, if the shark manages to attack the Orca they win!

Here is a simplified version of how to play Jaws Board Game:

Find the full list of game components for Jaws Board Game below:

Be the first to review “Jaws Board Game” Cancel reply 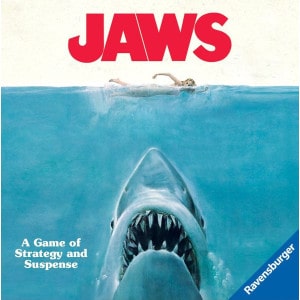 You're viewing: Jaws Board Game £21.70
Add to basket
We use cookies on our website to give you the most relevant experience by remembering your preferences and repeat visits. By clicking “Accept”, you consent to the use of ALL the cookies.
Cookie settingsACCEPT
Manage consent