In games of Inis players will compete to be elected as the King of the Island!  However, they must first achieve victory conditions consisting of leadership, land and religion.

Inis is a board game where 2-4 players aged 14 years and over will claim the crown to become King.  Players will need to become a leader, have clans in six different territories or have clans containing six sanctuaries to be in for the chance of winning!

Players will aim to achieve one of three conditions including leadership, land and religion. While just one victory condition can win the title of King, experienced players usually have tight balances of power to emphasise leadership.

Eliminating other clans will reduce chances of scoring victory conditions. However, battles will occur and is reflected using miniatures that represent warriors. Players will need to battle to achieve conditions in a way that it is impossible for opponents to combat!

Games of Inis plays in rounds where players will draft a hand of four action cards. These cards will provide a variety of actions including moving clans, adding clans, exploring, building and special actions.

Bluffing, careful drafting, hand management and a good understanding are the key aspects to victory. Once players have completed the discovery game they will be ready for a full, where a player will become King.

Find the full list of game components for Inis below:

Be the first to review “Inis” Cancel reply 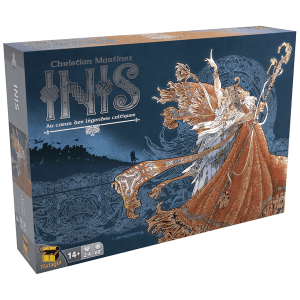 You're viewing: Inis £52.40
Add to basket
We use cookies on our website to give you the most relevant experience by remembering your preferences and repeat visits. By clicking “Accept”, you consent to the use of ALL the cookies.
Cookie settingsACCEPT
Manage consent