Build a tough and dependable team that includes Blitzers with this Blood Bowl Set. You can now use different tricks from your standard human teams and flaunt it during battle!

The Imperial Nobility Team have a very different skill set making them harder to play against, although they are similar to Human teams. Clad in the best equipment, this team will be found on any pitch looking spectacular.

The team are here to shake things up during battle and this set includes 12 incredible miniatures to participate in you Blood Bowl games. Imperial Retainer Linemen work across the field and can pick up skills, staring with fend. This skill means opponents would have to use a Blitz after you have been pushed back. Imperial Throwers have a running pass so complicated games can be played with ease. The Noble Blitzers are crucial players that will gain star player points during games as they make their scores. They come with both block and catch, making them ideal team members that can become a force to be reckoned with. Last but not least is the Bodyguards, that stand firm and take down opponents.

The Imperial Nobility Team with make the ultimate contribution to your games of Blood Bowl!

Add to your collection for your games of Blood Bowl by building the new Imperial Nobility Team which includes: 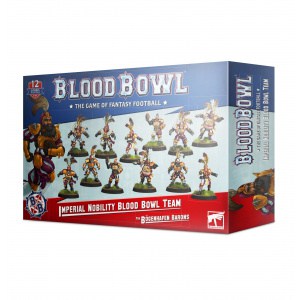 You're viewing: Imperial Nobility Team: The Bögenhafen Barons (Blood Bowl) £24.54
Add to basket
We use cookies on our website to give you the most relevant experience by remembering your preferences and repeat visits. By clicking “Accept”, you consent to the use of ALL the cookies.
Cookie settingsACCEPT
Manage consent