Impact: Battle of Elements is a fast, fun and easy to learn game of skill and colliding dice!

Impact: Battle of Elements, a re-imagined version of the classic game Strike, challenges players to knock one another from the game by rolling their dice well and using the special powers available to them.

Each player starts the game with five dice, with one side being blank and the other five sides showing an elemental symbol. On a turn, a player rolls one die into the arena, which is set inside the bottom of the box. If any two or more dice show the same symbol, that player then claims those dice and their turn ends. If a die shows a blank face, it’s removed from play; if no symbols match, then the player can end their turn or throw another die in the arena.

If the arena is empty at the start of your turn, then you must throw all of your dice into the arena, hoping to claim some back because if you ever run out of dice, then you’re out of the game. Whoever last holds dice wins!

Impact: Battle of Elements includes a variant in which each of the symbols has a special power, and when you make a match, you get to use the power of that symbol.

Be the first to review “Impact: Battle of Elements Dice Game” Cancel reply 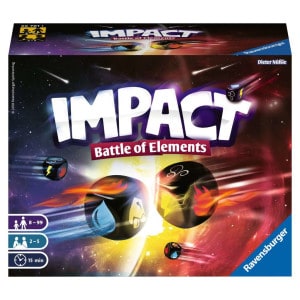