As the Horus Heresy rages across the galaxy, a lone Astropath learns a secret that will tip the balance of the war. But are his guardians leading him to safety or damnation?

THE STORY
The galaxy is burning. The Emperor’s loyal primarchs prepare to do battle with Warmaster Horus and his turncoat Legions on the black sand of Isstvan. Such dark times herald new and yet more terrible things still to come, and when Astropath Kai Zulane unwittingly learns a secret that threatens to tip the balance of the war, he is forced to flee for his life. Alongside a mysterious band of renegades, he plunges into the deadly underworld of Terra itself, hunted like a criminal by those he once trusted. In the face of betrayal, Kai must decide where his own loyalties lie and whether some truths should be buried forever.

READ IT BECAUSE
Space Marines from the Traitor Legions on the run on Terra itself. If that’s not enough, then how about one of the greatest secrets of the 31st millennium being revealed: just what did happen to the Thunder Warriors? 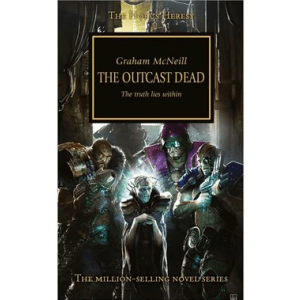 You're viewing: The Outcast Dead: Horus Heresy Book 17 (Paperback) £6.47
Add to basket
We use cookies on our website to give you the most relevant experience by remembering your preferences and repeat visits. By clicking “Accept”, you consent to the use of ALL the cookies.
Cookie settingsACCEPT
Manage consent