As war splits the galaxy, the Emperor toils in the vaults beneath His Palace. But his great work is in peril, with the forces of Chaos closing in…

READ IT BECAUSE
At last, the secrets of the Emperor’s project beneath the Palace will be revealed, and you’ll get a closer look at the Emperor Himself than ever before.

THE STORY
While Horus’ rebellion burns across the galaxy, a very different kind of war rages beneath the Imperial Palace. The ‘Ten Thousand’ Custodian Guard, along with the Sisters of Silence and the Mechanicum forces of Fabricator General Kane, fight to control the nexus points of the ancient eldar webway that lie closest to Terra, infested by daemonic entities after Magnus the Red’s intrusion. But with traitor legionaries and corrupted Battle Titans now counted among the forces of Chaos, the noose around the Throneworld is tightening, and none but the Emperor Himself can hope to prevail.

Be the first to review “The Master Of Mankind: Horus Heresy Book 41” Cancel reply 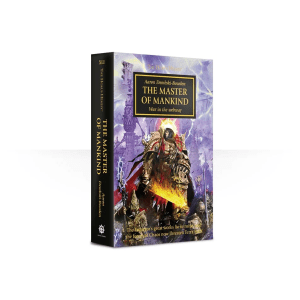 You're viewing: The Master Of Mankind: Horus Heresy Book 41 £6.47
Add to basket
We use cookies on our website to give you the most relevant experience by remembering your preferences and repeat visits. By clicking “Accept”, you consent to the use of ALL the cookies.
Cookie settingsACCEPT
Manage consent