A group of battered legionaries regroups after the Dropsite Massacre, on a seemingly insignificant death world. But a darkness gathers that threatens to consume Pythos forever…

READ IT BECAUSE
Following the fate of some of the few survivors of Isstvan as they become embroiled in a daemonic plot, this book gives a unique insight into the fate of the wider Imperium should the Warmaster’s plans succeed.

THE STORY
In the aftermath of the Dropsite Massacre at Isstvan V, a battered and bloodied force of Iron Hands, Raven Guard and Salamanders regroups on a seemingly insignificant death world. Fending off attacks from all manner of monstrous creatures, the fractious allies find hope in the form of human refugees fleeing from the growing war, and cast adrift upon the tides of the warp. But even as the Space Marines carve out a sanctuary for them in the jungles of Pythos, a darkness gathers that threatens to consume them all.

Be the first to review “The Damnation Of Pythos: Horus Heresy Book 30 (Paperback)” Cancel reply 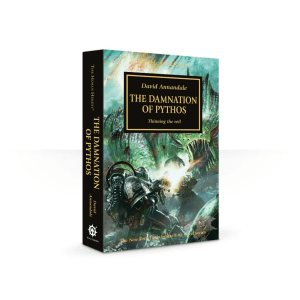 You're viewing: The Damnation Of Pythos: Horus Heresy Book 30 (Paperback) £6.47
Add to basket
We use cookies on our website to give you the most relevant experience by remembering your preferences and repeat visits. By clicking “Accept”, you consent to the use of ALL the cookies.
Cookie settingsACCEPT
Manage consent