After the massacre at Isstvan V, the broken remnants of three Legions formed a guerrilla force dedicated to slowing Horus’s advance on Terra. The ten tales in this volume relate exceptional stories of heroism by these Shattered Legions.

READ IT BECAUSE
It’s the contents of the anthology Meduson collected together with Graham McNeill’s The Seventh Serpent to form the definitive collection of Shattered Legions fiction. See how Shadrak Meduson’s feud with Horus plays out and the lengths to which these hardy survivors will go to score victories over the traitors.

THE STORY
Driven almost to the brink of self-destruction at Isstvan V, the Iron Hands now seek vengeance for the murder of their primarch Ferrus Manus. Gathering survivors from the Raven Guard and the Salamanders aboard any vessels capable of warp travel, these Shattered Legions wage a new campaign of annihilation against the traitor forces across the galaxy – a campaign masterminded by legendary warleader Shadrak Meduson. This Horus Heresy anthology contains ten short stories by authors including Dan Abnett, Chris Wraight, John French and many more. Also, in the novella The Seventh Serpent, Graham McNeill revisits the ragtag crew of the starship Sisypheum as they are drawn into a war of subterfuge against the Alpha Legion. 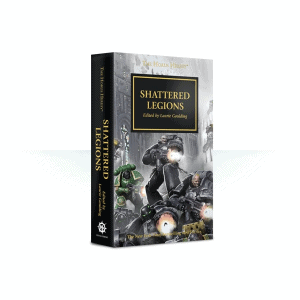 You're viewing: Shattered Legions: Horus Heresy Book 43 (Paperback) £6.47
Add to basket
We use cookies on our website to give you the most relevant experience by remembering your preferences and repeat visits. By clicking “Accept”, you consent to the use of ALL the cookies.
Cookie settingsACCEPT
Manage consent