Just as Guilliman’s dream of Imperium Secundus seems finally to be realised, the Night Lords launch a full invasion of distant Sotha. Their target? The mysterious Mount Pharos…

READ IT BECAUSE
Long-running plot threads tie together in a new full-length Horus Heresy novel. Roboute Guilliman’s new Imperium faces its first test as the Night Lords, scattered after the events of Prince of Crows, attack in force. And of course, Curze is still around… the scene with him and Sanguinius facing one another is a Heresy fan’s dream come true.

THE STORY
With the noble Emperor Sanguinius ruling from Macragge, Imperium Secundus stands as a lone beacon of hope even as the Warmaster’s forces continue to ravage the rest of the galaxy. Roboute Guilliman, still Master of Ultramar, has convinced his brother that Terra has fallen and that the mysterious Mount Pharos on Sotha now holds the key to mankind’s future. But the Night Lords, those cruel and pitiless sons of Konrad Curze, have been watching from the shadows, and make ready to launch their long-planned attack on the Pharos itself… 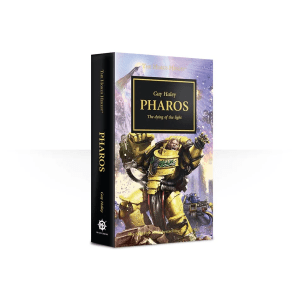 You're viewing: Pharos: Horus Heresy Book 34 (Paperback) £6.47
Add to basket
We use cookies on our website to give you the most relevant experience by remembering your preferences and repeat visits. By clicking “Accept”, you consent to the use of ALL the cookies.
Cookie settingsACCEPT
Manage consent