After the horrors of Isstvan V, Horus declares outright war against the Imperium. In the shadows of the Emperor’s Palace, powerful figures convene.

READ IT BECAUSE
The Horus Heresy is a war of Space Marine vs Space Marines, but other combatants lurk in the shadows… Here we see the precursors to Warhammer 40,000’s Assassinorum temples in action, even as Horus despatches a monstrous assassin of his own.

THE STORY
After the horrors of Istvaan V, Horus declares outright war against the Imperium. In the shadows of the Emperor’s Palace, powerful figures convene. Their plan is to send a team of assassins to execute the arch-traitor Horus and end the war for the galaxy of mankind before it’s even begun. But what they cannot know is that another assassin is abroad already, with his sights firmly set on killing the Emperor. 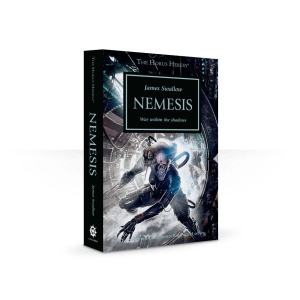 You're viewing: Nemesis: Horus Heresy Book 13 (Paperback) £6.47
Add to basket
We use cookies on our website to give you the most relevant experience by remembering your preferences and repeat visits. By clicking “Accept”, you consent to the use of ALL the cookies.
Cookie settingsACCEPT
Manage consent