Unaware of the wider Heresy and following the Warmaster’s increasingly cryptic orders, Roboute Guilliman returns to Ultramar to muster his Legion for war against the orks massing in the Veridian system.

BLACK LIBRARY HALL OF FAME: OCTOBER 2016
“I’m sure I’m not alone when I say that Know No Fear is definitely one of my favourite Horus Heresy novels. Considering that the series had already been going for eighteen volumes before that, it’s really saying something that Dan Abnett managed to find a new and even more impactful style to retell one of the greatest battles of the Age of Darkness…

It’s a sobering vignette of betrayal that perfectly encapsulates what the Horus Heresy is all about – Space Marines fighting Space Marines. It starts off so calmly, with the Ultramarines so bogged down in the mundane, domestic aspects of Crusade and empire, that the juxtaposition with the bloodshed and carnage of the Word Bearers’ attack is all the more upsetting for it. Again, like the Horus Heresy itself, we know what’s going to happen, and yet we have to watch as the protagonists become victims in an atrocity that they could never have anticipated.

Dan’s master stroke here is the use of the present tense, rather than the past – now often imitated, but never bettered. These events are happening NOW, not being recounted later. The reader is a (sometimes unwilling!) witness to the gut-wrenching, despair-inducing horror of these events as they unfold in apparent realtime, and that immediacy is what makes it feel so painfully real.

Even for people who haven’t read any other book in the series, I’d recommend Know No Fear as an absolute must.”

THE STORY
Unaware of the wider Heresy and following the Warmaster’s increasingly cryptic orders, Roboute Guilliman returns to Ultramar to muster his Legion for war against the orks massing in the Veridian system. Without warning, their supposed allies in the Word Bearers Legion launch a devastating invasion of Calth, scattering the Ultramarines fleet and slaughtering all who stand in their way. This confirms the worst scenario Guilliman can imagine – Lorgar means to settle their bitter rivalry once and for all. As the traitors summon foul daemonic hosts and all the forces of Chaos, the Ultramarines are drawn into a grim and deadly struggle in which neither side can prevail.

READ IT BECAUSE
It’s the beginning of one of the Horus Heresy’s most infamous and epic battles. Dan Abnett’s story grabs you by the shoulders and throws you into the midst of the Betrayal at Calth. The moment when the build-up ends and the battle begins is breathtaking and brutal and the rest of the novel doesn’t let up. 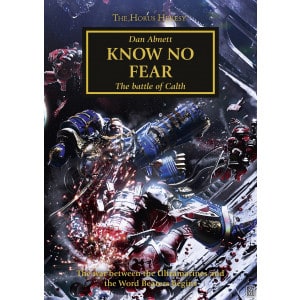 You're viewing: Know No Fear: Horus Heresy Book 19 (Paperback) £6.47
Add to basket
We use cookies on our website to give you the most relevant experience by remembering your preferences and repeat visits. By clicking “Accept”, you consent to the use of ALL the cookies.
Cookie settingsACCEPT
Manage consent