After thousands of years of expansion and conquest, the human Imperium is at its height. His dream for humanity accomplished, the Emperor hands over the reins of power to his Warmaster, Horus, and heads back to Terra.

READ IT BECAUSE
It all begins here. Witness Horus the hero, humanity’s greatest champion and the Emperor’s favoured son, before it all goes horribly, tragically wrong…

THE STORY
It is the 31st millennium. Under the benevolent leadership of the Immortal Emperor, the Imperium of Man has stretched out across the galaxy. It is a golden age of discovery and conquest. But now, on the eve of victory, the Emperor leaves the front lines, entrusting the great crusade to his favourite son, Horus. Promoted to Warmaster, can the idealistic Horus carry out the Emperor’s grand plan, or will this promotion sow the seeds of heresy amongst his brothers? Horus Rising is the first chapter in the epic tale of the Horus Heresy, a galactic civil war that threatened to bring about the extinction of humanity. 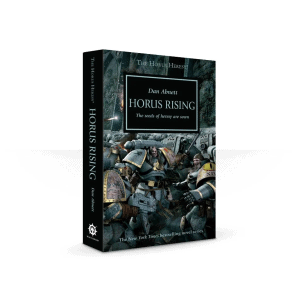 You're viewing: Horus Rising: Horus Heresy Book 1 (Paperback) £6.47
Add to basket
We use cookies on our website to give you the most relevant experience by remembering your preferences and repeat visits. By clicking “Accept”, you consent to the use of ALL the cookies.
Cookie settingsACCEPT
Manage consent