Horus has triumphed. His fleet nears Terra and the Throne of his hated father. Many have fallen to bring this moment about, their tales – collected here – are the ashes upon which the Heresy was born and prospered.

DESCRIPTION
A galaxy burns and brother turns on brother as the conflict brought about by a beloved son’s betrayal reaches its fateful end. The Warmaster Horus has triumphed. His massive fleet at last nears Terra and the patriarchal Throne of his hated father. Many have fallen to bring this moment about, their tales are the ashes upon which the Heresy was born and prospered. Others have played their own small parts, drops in an ocean of war and blood. None of it matters. Terra looks to the skies as it raises its defences. Armies muster, heroes raise their swords, citizens cower. The war is coming. And nothing can stop it.

This anthology includes sixteen stories set during the Horus Heresy, some of which are in print for the first time or were originally released as audio dramas, by authors Gav Thorpe, Chris Wraight, John French, James Swallow, Guy Haley, Nick Kyme, Rob Sanders and Anthony Reynolds.

READ IT BECAUSE
On the eve of the greatest battle in human history, it’s time to take stock and look back at some of the heroes and villains of the Horus in a collction of sixteen tales, including several set just before the Siege of Terra begins…

Be the first to review “Heralds Of The Siege: Horus Heresy Book 52 (Paperback)” Cancel reply 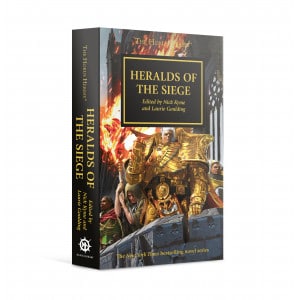 You're viewing: Heralds Of The Siege: Horus Heresy Book 52 (Paperback) £6.47
Add to basket
We use cookies on our website to give you the most relevant experience by remembering your preferences and repeat visits. By clicking “Accept”, you consent to the use of ALL the cookies.
Cookie settingsACCEPT
Manage consent