Having witnessed the terrible massacre on Isstvan III, Death Guard Captain Garro seizes a ship and sets a course for Terra to warn the Emperor of Horus’s treachery.

READ IT BECAUSE
Not only does this novel continue the story from the epic opening trilogy, it introduces one of the key figures of the series to come: Nathaniel Garro. His destiny might be murky (and clad in grey), but for now he’s a simple Death Guard captain. Find out what drove him from his Legion. Also, Rogal Dorn finds out about Horus’ treachery. Spoiler: he’s not happy.

THE STORY
Having witnessed the terrible massacre of Imperial forces on Isstvan III, Death Guard Captain Garro seizes a ship and sets a course for Terra to warn the Emperor of Horus’s treachery. But when the fleeing Eisenstein is damaged by enemy fire, it becomes stranded in the warp – the realm of the Dark Powers. Can Garro and his men survive the depredations of Chaos and get his warning to the Emperor before Horus’s plans reach fruition?

Be the first to review “Flight Of The Eisenstein: Horus Heresy Book 4 (Paperback)” Cancel reply 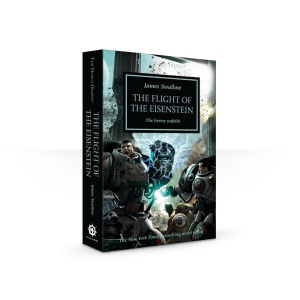 You're viewing: Flight Of The Eisenstein: Horus Heresy Book 4 (Paperback) £6.47
Add to basket
We use cookies on our website to give you the most relevant experience by remembering your preferences and repeat visits. By clicking “Accept”, you consent to the use of ALL the cookies.
Cookie settingsACCEPT
Manage consent