As Horus deploys his forces, a small band of loyal Space Marines from disparate Legions learn that a massive enemy armada is heading to Ultramar, home of the Ultramarines, headed by the most destructive starship ever constructed.

READ IT BECAUSE
A group of heroes who know there is no glory for them come together to strike a blow against the traitors. It’s a classic tale of a a handful of brave warriors against a mighty foe, and it doesn’t get much mightier than the Furious Abyss…

THE STORY
Now that news of Horus’s treachery is in the open, a time of testing has come. Some Legions have already declared their allegiance to the Warmaster, while the loyalty of others lies firmly with the Emperor. As Horus deploys his forces, a small band of loyal Space Marines from disparate Legions learn that a massive enemy armada is heading to Ultramar, home of the Ultramarines, headed by the most destructive starship ever constructed. Unless they can intercept the fleet, and destroy the mighty battleship the Furious Abyss, the Ultramarines may suffer a blow from which they will never recover.

Be the first to review “Battle For The Abyss: Horus Heresy Book 8 (Paperback)” Cancel reply 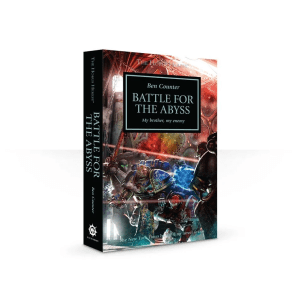 You're viewing: Battle For The Abyss: Horus Heresy Book 8 (Paperback) £6.47
Add to basket
We use cookies on our website to give you the most relevant experience by remembering your preferences and repeat visits. By clicking “Accept”, you consent to the use of ALL the cookies.
Cookie settingsACCEPT
Manage consent